Spring has come to Madison Creek,

along with stormy weather 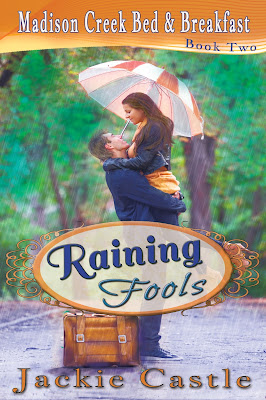 Bekka Winters hung up the phone. Ethan, her brother, needed her help filming a music video for his new music production studio. She stared at her already packed bags. Why not? She’d just graduated from college and didn’t exactly have a job to go to. Besides, a music video might look good on her resume when she looked for real work.
Stephen Gaines couldn’t believe Ethan had called him after their last blow up. They’d been music partners once. Stephen had ruined that. It was his expertise to wreck relationships especially those he had with women. Fortunately, Ethan didn’t know about him and Bekka. She was the one woman that had broken through to the deep parts of his heart. If only… how many times had he said that in the past? A fresh start is just what he needed.
Bekka’s mind bubbled with ideas for Ethan’s studio. Not to mention she couldn’t wait to see Ethan and Haley, the woman who’d captured her brother’s heart. But when she pulled into the drive and saw the familiar fancy car that Stephen drove, her heart dropped. There was no way she’d let him back into her life.